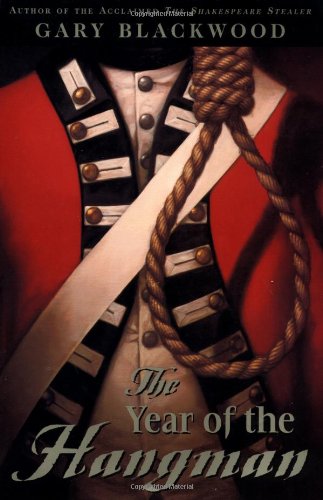 THE YEAR OF THE HANGMAN

In this adventurous, if somewhat unrealistic, novel, Blackwood () imagines what would have happened if the Americans lost the Revolutionary War. In 1777 (called the Year of the Hangman "because the three sevens in the date resembled the miniature gallows" and because of all the British traitors hanged), spoiled 15-year-old Creighton is taken from London by force, and sent to the Colonies to live with his uncle. But when Creighton accompanies his uncle, an unkind Englishman named Colonel Gower, to a new post in West Florida, their boat is seized by patriot privateers, led by the infamous Benedict Arnold. They bring the prisoners to the Spanish territory of New Orleans and imprison Gower, but take Creighton to live with Benjamin Franklin. Creighton agrees to spy for Gower, discovering that Franklin publishes a revolutionary paper, but his conscience begins to bother him. Not only are Franklin and his friends kind to Creighton but the lines between what is "good or bad, right or wrong" blur. A few characters seem stilted, such as Sophie, a hot-headed, French-speaking maid, and Peter, a warmhearted giant. But history buffs will recognize some clever dialogue ("It's a far more difficult thing to make up your own mind about what's right and act accordingly," Arnold tells Creighton) and the hero struggles with compelling questions, such as the meaning of honor and the value of war. Jail escapes, duels, code-breaking and more keep the story moving. Ages 14-up.