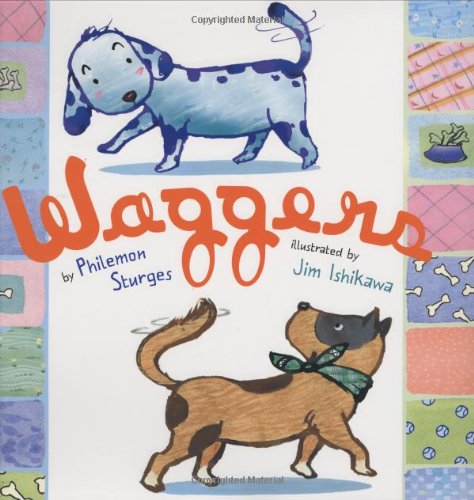 In this tale of tails, Sturges ( ) repeats a folk story explaining why dogs sniff each others' hind parts. According to the lore, they once misplaced their original tails and are trying to find them. The dogs here have called a meeting to get rid of cats. Upon arriving at a well-appointed lodge, "Each doggy went inside the hall./ Each doggy signed the book./ Each removed its wagger/ and hung it on a hook," like children in a grade-school coatroom. Meanwhile, a cat infiltrates the convention. When the Top Dog calls a vote ("All in favor, please bark ' .'/ Let every cat be rounded up/ for cat and kitty pie!"), the cat shouts, "Fire!" This sets a poor precedent for theatergoers, but the dogs scatter, confusing the tails in their hasty exit. To this day, "What doggies want to know... is: 'Where'd wagger go?' " The closing images show dogs sniffing around outdoors, some (not all) wearing mismatched tails. Ishikawa, a Hello Kitty creative director, creates chaotic mixed-media spreads. Dogs run every which way, but strong horizontal lines maintain forward momentum. In Sturges's mannered verse, a human is known as Master, "plain" rhymes with "raging main" and "dread" appears four times. Words like "doggy" and "wagger" help the verse scan, but sound precious. Such forced gaiety strikes a sour note, although readers may well be charmed by the amiable illustrations. Ages 3-up.