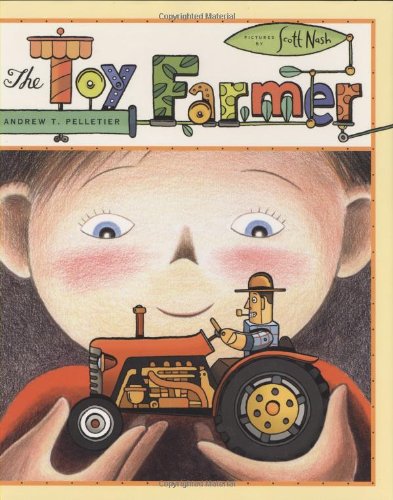 Nash's ( ) irresistible retro-inspired illustrations light up this fantasy about a toy that magically comes to life. When Jed finds his father's toy farmer in the attic, his father says, “Craziest toy I ever had!” Then his dad puts on “a secret little smile and winked at Jed as if he knew something that he wasn't telling.” When Jed awakens in the morning, his green bedroom rug has become a brown dirt field, which the farmer is plowing in his red tractor. Crops spring up; instead of fairytale, Jack-in-the-Beanstalk vines, this farmer's sprouts are like mechanized sculptures, looking as if they were formed of pipes decorated with scrolling vines. A pumpkin sports an old-fashioned skate key instead of a stem, and when it grows to gargantuan proportions, wheeled ladybug toys crawl over it. Keeping the story within Jed's fantasy world, Nash depicts the “people” the boy interacts with as toys also—a robot, a stuffed dog, wooden dolls—and eventually they convince Jed to enter the pumpkin in the county fair, where he wins a grand champion blue ribbon. When the toy farmer and all his transformations disappear, Jed's father consoles him by showing Jed his own grand champion ribbon, and says, “That Toy Farmer will show up again. He always does!” While Pelletier ( ) describes Jed's imaginative adventure competently, the overused ending undercuts the book's effectiveness. Ages 4-up.