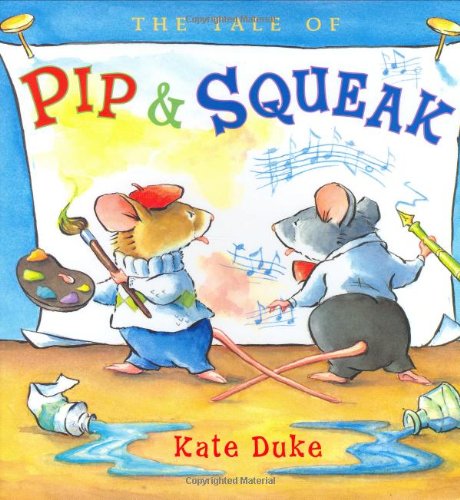 The Tale of Pip and Squeak

uke’s ( ) nimble narrative features plenty of peppy dialogue, yet the true charm of this tale is rooted in her whimsically detailed illustrations, rendered in watercolor, acrylic, pen and gouache. They depict a bustling mouse enclave in an attic, where the diminutive residents make merry use of abandoned items: a dressmaker’s dummy is a climbing wall; a Mets baseball cap with the words “Opera House” taped to it sits atop an old-fashioned radio; and tiny cups hang from a tricycle’s spokes in a makeshift Ferris wheel. Two mice brothers live in a home consisting of a shoebox flanked by two towers, one fashioned from a “Tinka Toys” box, the other from two “Clay-doh” containers. The former houses the studio of artist Pip; the latter the music room of songwriter and singer Squeak. The bickering brothers keep their distance, Pip complaining that the sound of Squeak’s singing hurts his ears and Squeak insisting the smell of Pip’s paint makes him cough so much “it was a miracle he could utter a note.” Preparing for their annual party, at which Squeak aspires to sing his longest song ever and Pip to display his biggest pictures ever, the overly competitive siblings get into a tussle that suddenly (and rather inexplicably) becomes a jolly free-for-all that leaves their party room in shambles. The two cooperate to clean up the mess and stage their best-ever musical and art performance. As readers happily pore over the art’s comical particulars, they will easily grasp the worthwhile message of this buoyant caper. Ages 3-up.