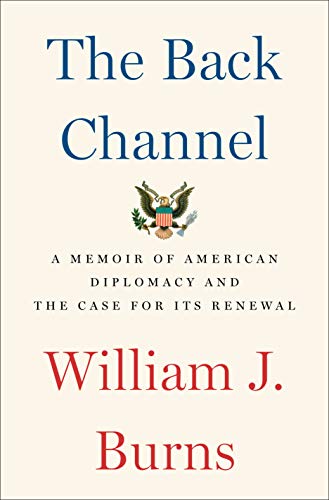 The Back Channel: A Memoir of American Diplomacy and the Case for Its Renewal

In this highly relevant work, Burns, who retired in 2014 as the deputy secretary of state, takes a fascinating look at his career and outlines ways in which American diplomacy can be strengthened. Since 1983 he has served in the Middle East, Russia, and Washington, D.C. Despite being a highly decorated member of the Foreign Service, Burns comes across as humble but forthcoming about American diplomacy’s successes and failures, including his own regrets, such as failing to implement “delayering” of decision-making bureaucracy within the department. His sketches of his colleagues and counterparts are often generous with praise, but also incisive; readers may be particularly interested in his take on Vladimir Putin (“the extreme embodiment of” the “Russian combination of qualities”: “cocky, cranky, aggrieved, and insecure,” but also “sober, ruthlessly competent, hardworking, and hard-faced”). He is particularly forthright in his condemnation of Donald Trump, describing his “erratic leadership” as leaving “America and its diplomats dangerously adrift.” The final section is a blueprint for a “post-Trump reinvention of diplomacy” that emphasizes tradecraft, negotiation, and “updating American priorities.” Burns’s work showcases an impressive combination of dedication, passion, and diligence, and persuasively demonstrates the “quiet power” that diplomacy can have in world affairs. This is not to be missed. [em](Mar.) [/em]
close
Details