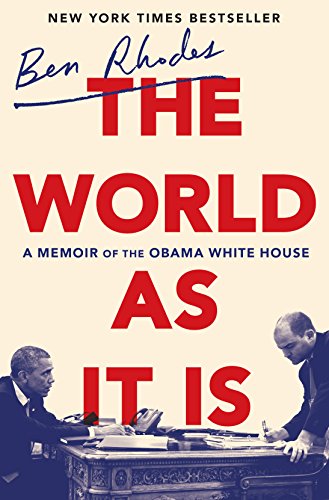 The World as It Is: A Memoir of the Obama White House

Many frustrations and a few victories emerge in this sometimes hopeful, often disillusioned memoir of foreign policy in the Obama administration. Rhodes (Without Precedent) was deputy national security adviser to Barack Obama, tasked with speech-writing, some diplomacy, and frequently giving advice to the president. His narrative is a study in the limits of American power: he advocated strong U.S. support for democratic reform after the Arab Spring uprisings, as well as military intervention in Libya and Syria, only to see U.S. initiatives flounder amid the region's intractable political dysfunctions, Republican obstructionism, and media hysteria. (His emails concerning the assault on the American consulate in Benghazi, he notes, provoked right-wing conspiracy-mongering.) Rhodes records triumphs as well, including the thawing of relations with Cuba, which he helped negotiate, and the nuclear agreement with Iran. Much of the book is an insider's perspective on Obama as he strategizes in the Situation Room, fences with Putin on the hotline, and broods on Air Force One; the president is rational, thoughtful, exasperated when the world doesn't follow suit, and grimly realistic. (The "Obama doctrine," per the president, is "Don't do stupid shit.") Rhodes's analyses of problems in foreign countries can be superficial, but his account of policy sausage-making is well-observed and riveting. Photos. (June)
close
Details