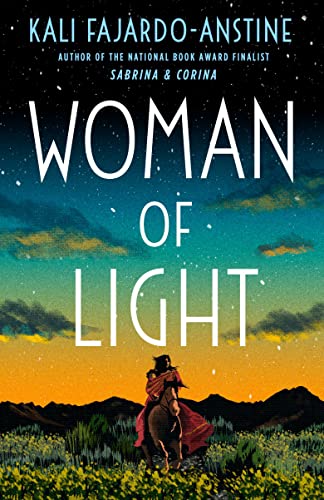 Fajardo-Anstine’s impressive if underdeveloped debut novel (after the collection Sabrina & Corina) recounts the harrowing multigenerational adventures of a family originating in the “Lost Territory” of late 19th-century New Mexico and arriving in Denver by the 1930s. Depictions of the Lost Territory are vivid and well-informed. Pidre Lopez, the family’s anchor and a Puebloan Indigenous person, settles in Animas, Co., where he runs a Wild West show. The author describes it wonderfully: “a pistol crack, a long rifle’s pinging bullet, the exasperated neigh of a horse.” The narrative centers for the most part on seer Luz “Little Light” Lopez, who leads a hardscrabble life in 1930s Denver with her aunt Maria Josie and her brother, Diego, a snake charmer and womanizer. Luz entrances with visions dredged from reading tea leaves, but her gift of seeing often portends ominous circumstances such as racist violence from the KKK. Luz uses her family connections to become a secretary in a law office where she finds herself in a love triangle with her attorney boss and a young mariachi musician. Unfortunately, Fajardo-Anstine’s Denver lacks the same historical precision she gives to the Lost Territory portions, and is limited to a few plugged-in period details. Despite the uneven effort, it’s clear this author has talent to spare. Agent: Julia Masnik, Agency: Watkins/Loomis Agency. (June)

Correction: An earlier version of this review misstated the location of a fictional town and misidentified a character’s nationality.