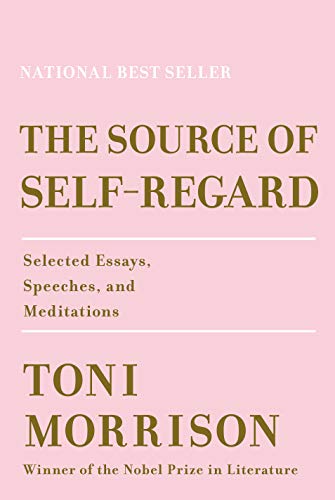 The Source of Self-Regard: Selected Essays, Speeches, and Meditations

Some superb pieces headline this rich, if perhaps overstocked, collection of primarily spoken addresses and tributes by Nobel laureate Morrison. Many are prescient and highly relevant to the present political moment. For example, Morrison alludes in 1996 to controversy at the U.S.-Mexico border, writing that “it is precisely ‘the south’ where walls, fences, armed guards, and foaming hysteria are, at this very moment, gathering.” She focuses, of course, on the issues closest to her heart: racism, the move away from compassion in modern-day society, the often invisible presence of African-Americans in American literature, and her own novels. Some of her strongest pieces are the longest: for example, her talk on Gertrude Stein, and her two essays on race in literature, “Black Matter(s)” and “Unspeakable Things Unspoken” are must-reads. The collection is organized thematically, which is helpful, but because the pieces jump around in time, dates would be a valuable addition to the essay titles. And while it is no doubt important to create a comprehensive collection of such a noted figure’s writings, the book, which includes 43 selections, can seem padded and overlong at times. Nevertheless, this thoughtful anthology makes for often unsettling, and relevant, reading. (Feb.)
close
Details