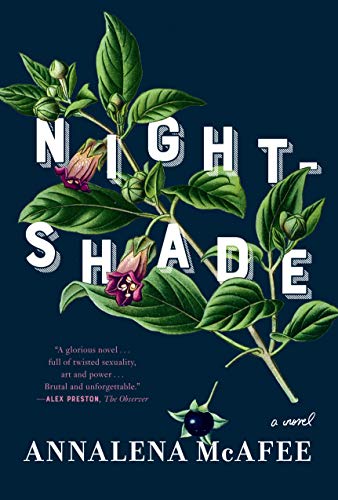 McAfee (Hame) centers her caustically entertaining latest on Eve, a self-aggrandizing middle-aged antiheroine obsessed with her thwarted artistic vision. Eve’s story begins at the garden of her former home and unfolds on her peripatetic journey through London’s unfriendly streets. The trip allows Eve to consider her ambition to be more than a “flower painter,” a status gained through the two works for which she is best known: Girl with a Flower, a famous portrait featuring Eve as a youthful, submissive muse, and Underground Florilegium, Eve’s “first major work... much reproduced, copied, and pirated.” Now, at 60 years old, Eve acidly recollects the obstacles to her artistry—exploitative friends and fellow artists, callous reviewers to whom she is mere “ape of nature,” a famous husband, an insipid daughter, a disloyal assistant, a visionless agent. She also ruminates on Poison Florilegium, a painting she wishes to compose that would be “monumental in scale” and depict flowering Swiss meadows where Alpine flowers are replaced with “the deadliest plants.” This, “nature’s most vicious prank,” would, Eve believes, redeem her and, by proxy, all of history’s thwarted and overlooked women artists. The painting becomes Eve’s singular, myopic focus, reawakening her passions but blinding her to the machinations of those around her. Eve’s obsessive self-absorption and ambition make this a pleasing investigation of the limits of artistic influence. (Aug.)
close
Details