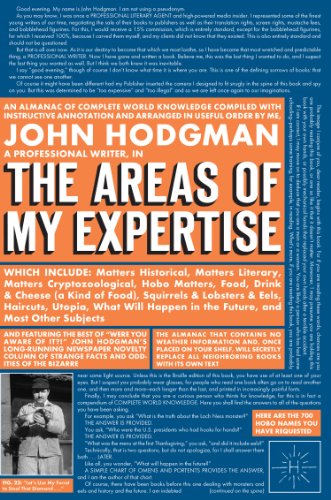 The Areas of My Expertise

In this super-literate, ultimately exhausting exercise in literary parody, magazine contributor Hodgman has produced "a compendium of COMPLETE WORLD KNOWLEDGE." From sections titled "What Will Happen in the Future" to "What You Did Not Know About Hobos," he piles up smart-alecky nonsense in layer upon layer of surreal, wholly fictional factoids. Whether highlighting American presidents who had hooks for hands, or sketching out the mythical secrets of Yale University, Hodgman creates a strange and intermittently hilarious parallel universe where lists of history's worst haircuts (in addition to the Mullet, there are the Scrape, the Scab and the Shag-Swoop) are printed alongside descriptions of "famous novels that were not originally published as books." Sprinkled throughout with breathless "factual" interjections—"Were you aware of it? The body of Thomas Edison was never buried. Instead it was displayed for many decades in a traveling carnival.... DOES IT EVEN SEEM POSSIBLE?"—this "almanac" demonstrates Hodgman's formidable imagination, if not his ability to amuse consistently. The individual passages are funny but get lost in an already overstuffed work. For the hyper-well-read fans of publications like , this is a treasure trove of twisted absurdist miscellany. For others, however, it may just be too much of a good thing.