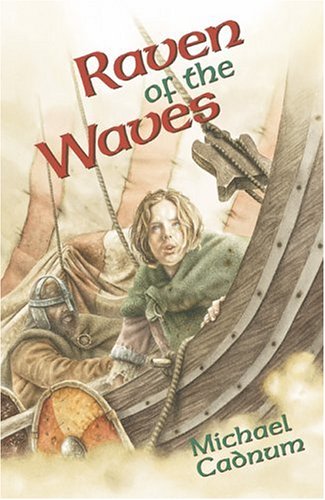 RAVEN OF THE WAVES

In this swashbuckling, often violent adventure set in the eighth century, Cadnum () shows how a clash of cultures profoundly affects two distant enemies: a young Viking warrior and a monk's apprentice. At age 17, Lidsmod is eager to embark on his first pillage. He is proud to be sailing on the to a distant place rumored to hold much treasure. Meanwhile, 13-year-old Wiglaf, afflicted by a withered arm but pious and blessed with the gift of healing, goes about his life in his English village. Alternating Lidsmod's eventful voyage with bucolic scenes of Wiglaf's days, the author provides a sharp contrast between the mores and beliefs of the two boys. Readers will find themselves continually switching loyalties until, inevitably, the protagonists meet during a bloody battle. Unsurprisingly, Wiglaf proves to be more consistent and noble, remaining quick-witted and compassionate during and after his brutal kidnapping. Lidsmod's sentiments and values are more slippery. Although he can identify with the captive boy, his thirst for blood and glory never significantly wavers; and although he agrees that Wiglaf should be freed, he sees no wrong in keeping the holy relics his shipmates stole. If the moral to the story is somewhat muddy, graphic scenes of murder, torture and ruin are perhaps all too clear. Ages 14-up.