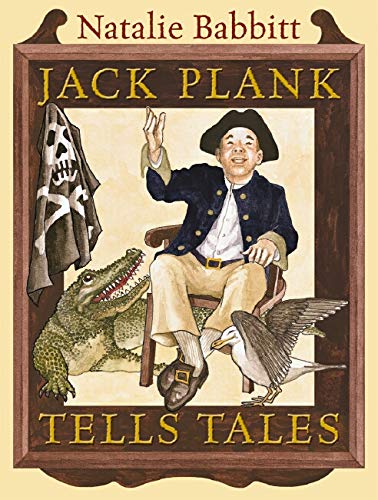 Billed as Babbitt's first novel in 25 years, this book is really a charming collection of linked stories about the gentler side of pirate life aboard the . The tale-teller, Jack Plank, understands that "plundering" is not his strong suit: "You have to yell and make faces and rattle your sword.... Jack didn't seem to have a knack for it." So when the pirating economy slows, kindly Captain Scudder is forced to give him the pink slip. Put ashore with a small bag of gold florins donated by his shipmates, Jack finds himself on Saltwash Island, and convinces Mrs. DelFresno to take him in as a boarder. She's not too sure about renting a room to a pirate (his attire gives him away) but daughter Nina, 11, promises to help Jack quickly find a new occupation. Over the next eight days, however, Jack talks himself out of one profession after another by regaling his fellow boarders with colorful stories from his pirating past, featuring ghosts, mermaids and shapeshifters (but no violence), each of which demonstrates why he could never be a farmer, baker, jeweler or barber. Jack's lilting tales make an ideal read-aloud—so long as no one misses an up-close look at Babbitt's skilled pencil drawings. Perceptive readers will figure out long before Jack precisely what profession he's perfect for (the title gives it away), as Babbitt expertly weaves a message into Jack's tales: that stories are just as vital to a community as farming the land or baking bread. Ages 8-up.