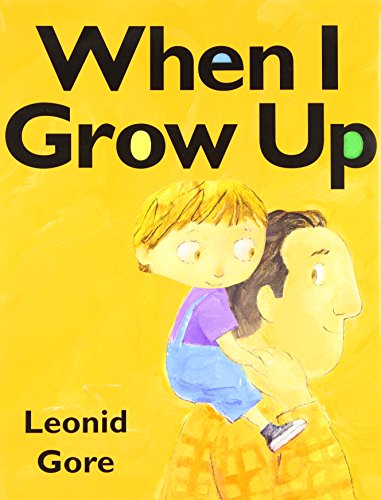 When I Grow Up

With cheery acrylics, straightforward text and smart use of die-cuts, Gore follows a boy's musings about what he might be when he grows up. Looking outside gives him some inspirations from nature. A small raindrop suggests, “You could be like me,” and at the turn of the die-cut page, the raindrop cutout becomes part of “the fastest river/ running through the hills.” A fuzzy caterpillar metamorphoses into “the most colorful butterfly in the meadow,” and a green sprout becomes “the tallest tree/ the world has ever seen.” Eventually, the book winds down to a quiet bedtime cadence, as a shadow becomes “the gentlest night, full of dreams.” Although the book breaks no new ground, the die-cuts are used to clever effect (the die-cut of the boy's shadow takes the shape of three birds sleeping in a nest on the following page). On the final page, as the father lifts his son high in the air, the boy reveals, somewhat unsurprisingly, what his goal will be: “When I grow up... I will be just like you!” Ages 3–5.