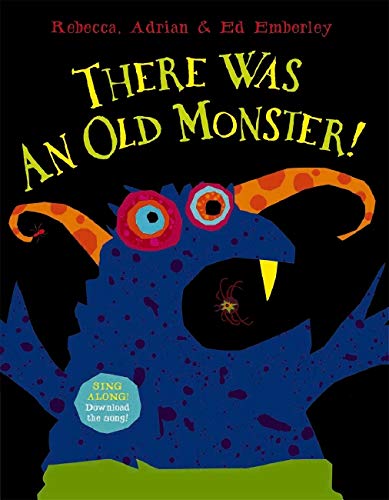 There Was an Old Monster!

Another Emberley gets into the book-creating act with this takeoff on the cumulative song, “There Was an Old Woman Who Swallowed a Fly,” which features jaunty rhymes yet an intermittently bumpy rhythm. Songwriter Adrian, Rebecca's daughter and Ed's granddaughter, collaborated on the music (the song will be available for download from Scholastic's Web site). The splotchy purple monster's initial snack—a tick—doesn't agree with him (“I don't know why/ he swallowed the tick/ 'cause it made him feel sick”), and the ants he ingests to catch the tick “had him dancing in his pants.” After downing a lizard, bat, jackal and bear, the monster feels “like he was dyin',” so he tries to swallow a lion—an attempt that doesn't end well. Stylized computer-scanned collage art amplifies the narrative's inanity, portraying the monster (and the accumulating contents of his belly) with electric hues against a black background. Timid readers may find the wild-eyed monster and sharp-toothed lion scary, but most will hone their sense of schadenfreude on the creature's exaggerated discomfort and find this creepy, crawly fun. Ages 3–5.