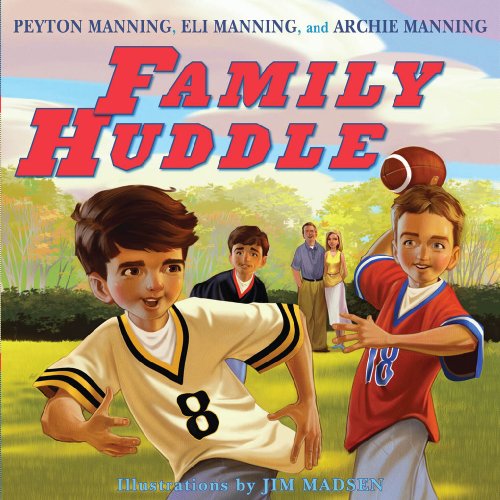 This writing team of two Super Bowl–winning quarterbacks and their former star quarterback father should score with young fans, despite some heavy-handed clichés and syrupy dialogue. As the young Manning family prepares to visit two sets of grandparents, mother Olivia announces to her three football-playing sons (oldest brother Cooper is practicing with his brothers), “This weekend is going to be filled with family and football.” Madsen’s ( ) digitally created art is most successful in delivering dynamic images of the clan, ably conveying the siblings’ abundant energy, and painterly outdoor scenes of autumn foliage; vehicles and buildings are awkwardly stiff and geometric by comparison. The story itself is fairly empty—it’s mainly a vehicle to introduce plays like the quarterback sneak and buttonhook (which are diagrammed on the endpapers) and platitudes like “As long as you look out for each other, you will always be on a winning team.” But readers should pick up some new moves and game ideas for both on and off the field. Ages 4–8.