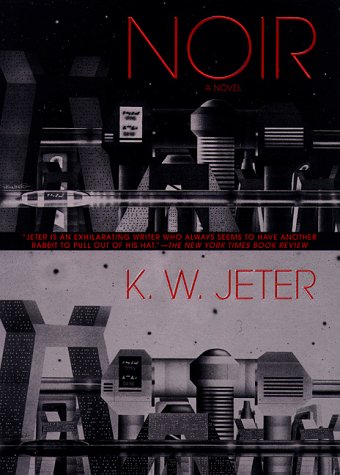 A master of dark visions, Jeter (Blade Runner: Replicant Night) delivers his most difficult and intellectually ambitious novel to date. In a near-future world where the poor are entirely disenfranchised and white-collar employees live and work themselves to death in tiny, randomly assigned cubicles, the super-wealthy seek vicarious, perverse, cybernetically enhanced thrills on the streets of Los Angeles. Repulsed by the era he's forced to live in, McNihil, a retired cop with a violent past, has had his eyes surgically altered so that he sees everything through a computer-generated overlay that simulates the black-and-white world of the hard-boiled detective films of the 1930s. When Harrisch, an executive with a powerful multinational corporation, tries to hire him to solve a murder and track down the deceased's missing ""prowler,"" a computerized simulation of the dead man, McNihil refuses, only to find himself blackmailed into compliance. Aided by a gutsy young operative named November, McNihil uncovers a complex web of lies and violence, a world where nothing is what it seems and even the dead have power. Jeter is a fine prose stylist, but some will find his knotted, intensely metaphoric language slow going. Equally problematic is his tendency to assume in his reader a sophisticated knowledge of the conventions of both the noir thrillers of the 1930s and contemporary cyberpunk SF. Frequently, his characters seem to operate in an evocative semi-vacuum, the facts needed to explain the plot having been mysteriously elided from the narrative. This is a difficult, eccentric and rewarding novel, an SF equivalent, perhaps, of The Name of the Rose. (Nov.)
close
Details