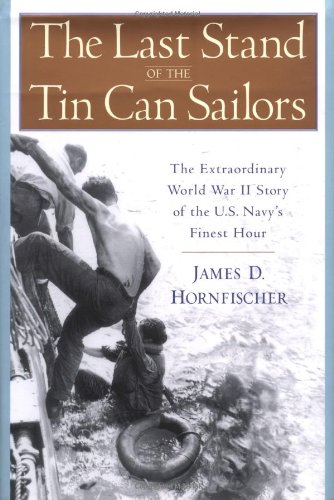 THE LAST STAND OF THE TIN CAN SAILORS: The Extraordinary World War II Story of the U.S. Navy's Finest Hour

One of the finest WWII naval action narratives in recent years, this book follows in the footsteps of creating a microcosm of the war's American Navy destroyers. Hornfischer, a writer and literary agent in Austin, Tex., covers the battle off Samar, the Philippines, in October 1944, in which a force of American escort carriers and destroyers fought off a Japanese force many times its strength, and the larger battle of Leyte Gulf, the opening of the American liberation of the Philippines, which might have suffered a major setback if the Japanese had attacked the transports. He presents the men who crewed the destroyer Taffy 3, most of whom had never seen salt water before the war but who fought, flew, kept the crippled ship afloat, and doomed ships fighting almost literally to the last shell. Finally, Hornfischer provides a perspective on the Japanese approach to the battle, somewhat (and justifiably) modifying the traditional view of the Japanese Admiral Kurita as a fumbler or even a coward—while exalting American sailors and pilots as they richly deserve. (American admirals don't get off so easily.) Not entirely free of glitches in research, the book still reads like a very good action novel, indicated by its selection as a dual split main selection of the BOMC and History Book Club alternate.