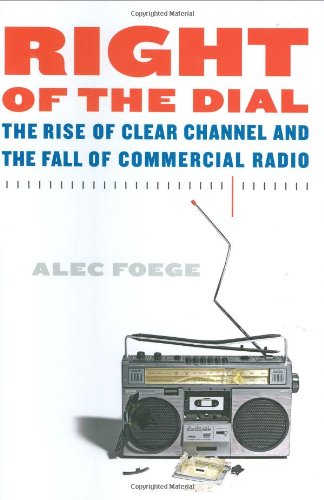 Right of the Dial: The Rise of Clear Channel and the Fall of Commercial Radio

Journalist Foege ( ) brings objectivity and insight to this exploration of Clear Channel, one of the most reviled media conglomerates in the U.S. The author aims for an unbiased understanding of the corporation and its practices, how it came to be and what it says about our culture. The reader follows the Clear Channel operation from its inception as a family business in the 1990s through commercial expansion, megamergers, vertical integration, antitrust lawsuits and the eventual sale of a third of its holdings. Foege cobbles together an oral history of the company, painting Clear Channel executives as businessmen first and foremost. To them, payola (accepting financial gifts in exchange for airplay) and voice tracking (phoning in “local” broadcasts from a centralized location) just made sense for the bottom line. The result has been the homogenization of radio—a phenomenon that has produced one, single, all-too-familiar classic rock station that Foege characterizes as “a mild condition of being. Like a toothache or a strained knee.” While many are quick to call this evil, media monopolies of this kind have been sanctioned by the government through deregulation. Foege’s history is at its best while unpacking this confrontation of American values between art and commerce.