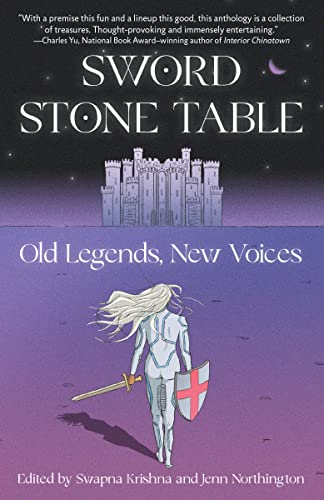 Krishna and Northington bring together 16 diverse retellings of Arthurian legend to create an anthology of breathtaking breadth, depth, and creativity. Daniel M. Lavery’s “How, After Long Fighting, Galehaut Was Overcome by Lancelot Yet Was Not Slain and Made Great Speed to Yield to Friendship; Or, Galehaut, the Knight of the Forfeit” is an utter revelation that casts the concept of chivalry in a new light. Other standouts include Waubgeshig Rice’s moving, gorgeous “Heartbeat,” about an Anishinaabe preteen named Art who unearths a stone to find long-hidden ancestral drums; Jessica Plummer’s hilarious “Flat White,” in which the Lady of Shalott acts as Lancelot’s barista; Silvia Moreno-Garcia’s haunting, understated “A Shadow in Amber,” which follows a nameless narrator as she obsesses over Lancelot, whose illegally trafficked memories she pays to experience; and Alexander Chee’s “Little Green Men,” a Mars-set exploration of reality TV celebrity culture filtered through “Sir Gawain and the Green Knight.” There isn’t a bad story in the bunch, and the anthology offers such a variety of style, theme, and genre that die-hard Arthurian fans and more casual readers will be equally delighted. This is a must-read. [em]Agent: Kate McKean, Howard Morhaim Literary. (July) [/em]

Correction: An earlier version of this review misidentified the number of stories contained in the collection.

We Dream of Gods
We Dream of Gods
Devin Madson
The religious, political, and personal conflict between the Chiltaens, the Kisians, and the Levanti comes to an epic close in Madson’s masterful final Reborn Empire fantasy Continue reading »