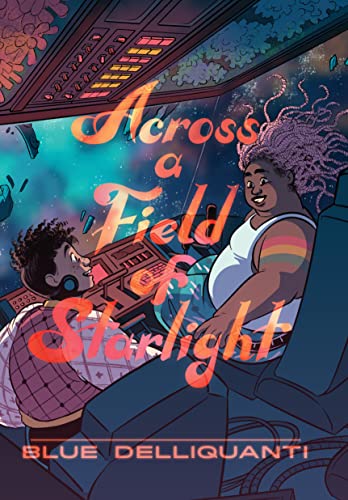 Across a Field of Starlight

Two nonbinary youths who meet as kids ally against fascism in this spacefaring graphic novel with a Star Wars feel. When researchers from a peaceful science commune land on a planet to collect data, child researcher Lu, who is Black, follows an ion trail to an abandoned transport shuttle. There, Lu finds light brown–skinned Fassen, the sole survivor of a Fireback Brigade resistance shuttle that crashed after an attack by the Ever-Blossoming Empire. Though Lu wants to help Fassen, Lu cannot break their community’s rules, which stipulate “never, ever” getting involved in the intergalactic conflict. Not wanting to leave Fassen stranded, though, Lu fixes the ship’s communication equipment, creating a secret channel for continued communication. Years later, Fassen, a junior-grade medic cadet with the resistance, is on a mission gone wrong when they use the channel to reach solo researcher Lu—an action that transports Fassen and a squadmate across the empire, directly to Lu’s location. In jewel-toned art that foregrounds figures and technology, Delliquanti’s (O Human Star, for adults) tropey comic offers a variously inclusive cast, including incidental nonbinary representation, and explores themes of nationalism, imperialism, and revolution. Ages 12–up. Agent: Jennifer Linnan, Linnan Literary Management. (Feb.)
close
Details