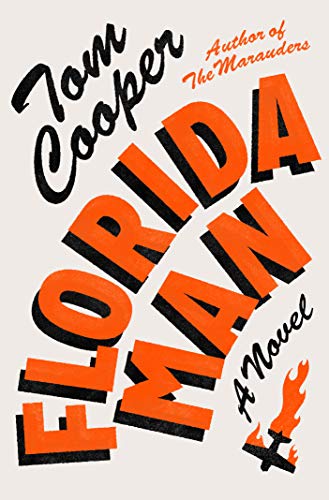 Beach bums, wack jobs, and refugees populate Cooper’s Technicolor vision of 1980s Florida in this darkly entertaining tale (after The Marauders) set on fictional Emerald Island on the Gulf Coast. Reed Crowe has a secret, but no idea how dangerous it will prove. Two decades earlier, at 17, Reed and his soon-to-be wife, Heidi, witnessed a plane crash and found a shipment of marijuana in the burning wreckage. “This is going to change our life,” Reed says. Now, proprietor of a cheesy tourist attraction called the Florida Man Mystery House and owner of the seedy Emerald Island Inn (acquired thanks to his sudden windfall from the drugs), Reed is middle-aged, often stoned or drunk, and melancholy. Reed and Heidi’s marriage has unraveled, partly because of the murky circumstances around their daughter’s death, and partly because he wanted to stay put, while she insisted on leaving for New York City to advance her art career. Wayne Wade, Crowe’s degenerate, drug-peddling childhood friend and “de facto factotum,” works at the motel, but not much, and runs his mouth at local watering hole the Rum Jungle, where Henry Yahchilane, a Seminole Vietnam vet, overhears something from Wayne about a human skull sighting on a Florida Man swamp tour. After a series of violent, misunderstood encounters, Crowe and Yahchilane team up against crack-addicted Cuban refugee and assassin Hector “Catface” Morales, who seeks revenge on Crowe for stealing his drugs years earlier. As Crowe manages to avoid death by snake, sinkhole, stabbing, explosion, Jet Ski, and heartbreak, he begins to know himself better, along with those around him. Throughout, Cooper’s macabre and brutal universe crackles with energy and wit, and will hold readers’ attention until the very end. Cooper’s riotous, riveting tale rivals the best of Don Winslow. (July)
close
Details