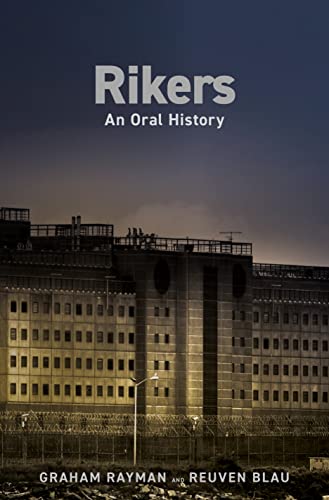 Reporters Rayman (The NYPD Tapes) and Blau offer a stunning look inside the Rikers Island prison complex. Drawing on interviews with inmates, parolees, wardens, corrections officers, visitors, and prison reform activists, the authors convey the inhumanity, disorder, and dysfunction of a facility that was intended, when it was opened in the 1920s, to be “a model prison that would correct the evils of the past.” Grouped by subject matter, the testimonies touch on contraband, prison pregnancies, riots, escape attempts, solitary confinement, medical care, life after incarceration, and more. Former inmate Kathy Morse paints a harrowing picture of Rikers’s “medieval” bullpens, where inmates, many of them suffering through withdrawal, are held when they first arrive: “One woman in the cell had crack hidden in her hair, and it fell out. And they all scrambled around the floor, like it was a piñata that had been opened.” Elsewhere, interviewees describe the humiliation of showing up to court when “your suit is crumpled up and you smell like shit”; tragic scenes involving mentally ill prisoners, including one who broke a light bulb and gouged his own eye out; and the degrading treatment visitors are subjected to. Throughout, Rayman and Blau provide eye-opening statistics and history lessons, while letting the voices of their interviewees take center stage. It’s a must-read for anyone interest in criminal justice reform. Photos. (Jan.)
close
Details