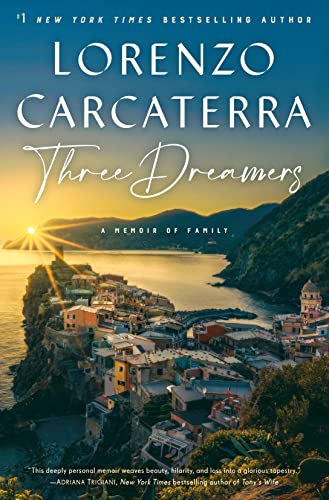 Three Dreamers: A Memoir of Family

Carcaterra (Sleepers) pays a moving tribute to his grandmother, mother, and wife in this heartfelt account of how they shaped him. A fearless advocate for her family during the Nazi occupation of Naples in WWII, Carcaterra’s “Nonna” Maria lost a son during the invasion and, through her resilience, taught him about courage, forgiveness, and generosity. His mother, Raffaela, however, “presented me with a different picture,” Carcaterra notes. She stayed married to an abusive husband who’d murdered his first wife and cheated countless people, and her “words to me, sometimes kind, often bitter, gave fuel to my desire to live as far from such misery as possible,” Carcaterra writes. In 1976, while working at the New York Daily News, Carcaterra met the third woman who would profoundly impact his life: Susan Toepfer, a brilliant editor who became his wife of three decades and mother of his two children. In the book’s introduction, Carcaterra reveals that Susan died from the same cancer that took his mother’s life. With spare yet resounding prose, Carcaterra follows these women from his childhood home in Hell’s Kitchen to the Italian island of Ischia, to the battles each of them fought at the end of their lives. This emotional narrative isn’t for the fainthearted, but its beauty is a thing to behold. Agent: Suzanne Gluck, WME. (May)
close
Details