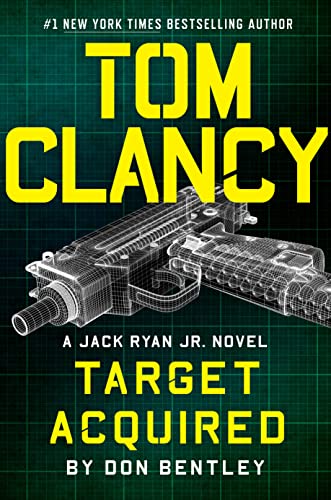 The exciting eighth Jack Ryan Jr. thriller, the first contribution to the bestselling Tom Clancy franchise from Bentley (the Matt Drake series), finds Jack, an operations officer for the clandestine spy agency known as the Campus, in Israel on a joint mission with the CIA. In a Tel Aviv marketplace, Jack notices an attractive woman with her son, who behaves in a way that suggests he’s autistic. When a man with a knife appears bent on attacking the woman, Jack jumps in and fights off the assailant, who flees into the crowd. Immediately afterward, Jack is taken at gunpoint by a pair of Israeli internal security agents to their station, where they harass him for being an American; they suspect he’s working for the CIA, but he admits to nothing. His original mission having been a disappointment, Jack, who once helped a childhood friend who was developmentally disabled, decides to stay and track down the woman he saved, Becka Schweigart, an American scientist, and her son, Tommy, to see if he can help the boy. When Becka and Tommy are kidnapped, heroic, chivalrous Jack decides to stick around and assist the Israelis in their attempt to rescue mother and son. The action builds to a terrific, multiple point-of-view battle scene in the air and on the ground in Syria. Bentley proves himself a worthy successor to Tom Clancy. Agent: Jennifer Rudolph Walsh, WME. (June)
close
Details