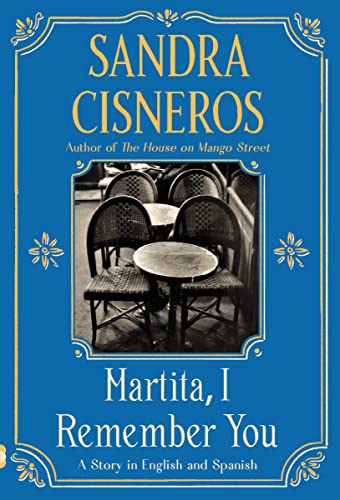 In this bilingual edition (written originally in English and translated into Spanish by Liliana Valenzuela) of Cisneros’s exquisite story (after Puro Amor), a woman relives her time in Paris two decades earlier via a cache of discovered letters. At 20, Corina aspires to become a writer and escape her poor Mexican Chicago family, prompting her to travel to Paris. She meets Marta, from Chile, and Paola, from Italy, and mingles with artists, dancers, and performers. She stretches her money to stay longer, realizing, “I can’t go home yet. Because home is bus stops and drugstore windows, elastic bandages and hairpins, plastic ballpoints, felt bunion pads, tweezers, rat poison, cold sore ointment, mothballs, drain cleaners, deodorant.” Back in Chicago, she holds onto a photo of herself with Marta and Paola, but swiftly loses touch with them. Decades later, she discovers a letter from Marta sent shortly after she’d left, suggesting they meet in Spain, “in case you’re still traveling.” Corina speaks to Marta in her thoughts and gives the rundown of her life: divorced, remarried, two daughters. Cisneros’s language and rhythm of her prose reverberate with Corina’s longing for her youth and unfulfilled promise. The author’s fans will treasure this. Agent: Susan Bergholz, Susan Bergholz Literary. (Sept.)

Correction: An earlier version of this review incorrectly stated this book was translated from the Spanish into English.