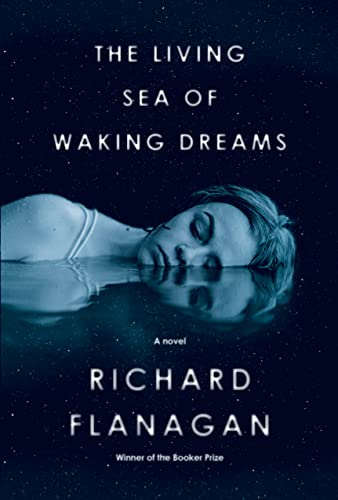 The Living Sea of Waking Dreams

Man Booker winner Flanagan (The Narrow Road to the Deep North) shines in his fierce, surrealistic look at a family’s dissolution in a recognizable if dystopian Australia that’s ravaged by wildfires. Amid the fires, 56-year-old Anna, an award-winning Sydney architect, makes reluctant trips to Hobart, Tasmania, to check on her mother, Francie. After Francie suffers a catastrophic brain hemorrhage, Anna’s older brother Tommy, an unsuccessful artist who has been shouldering Francie’s care, hopes to let her die in peace. Guilt-ridden over her earlier neglect of her family and unprepared to face her mother’s mortality, Anna instead sides with their younger brother, Terzo, and orders aggressive treatment. Francie begins hallucinating as the increasingly invasive interventions fail, and despite Francie’s delusions, which come through when Francie musters the energy to speak, Anna finds new tenderness in her time with her mother. Meanwhile, Anna’s left ring finger painlessly but inexplicably vanishes, soon followed by a kneecap and a nipple. Though she sees the body parts of others disappearing, too (her 22-year-old son gradually fades away to a few fingers), no one comments or reports on the eerie phenomenon. Amid all of these losses, her complacency about her once rewarding life vanishes. Juxtaposing measured prose with passages that jolt and tumble, and realistic depictions of medical issues with Francie’s phantasmagoric visions (“the mountain plains outside her window full of fires and sandstorms where, nightly, women queued in one area for abortions and in another for orgies, where fleeing people turned into plants only to perish in flames”), Flanagan’s novel illuminates the dangers of taking the world and one another for granted. Its intensity, urgency, and insights are unforgettable. (May)
close
Details