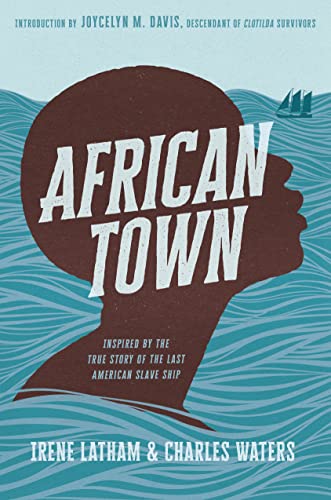 Based on historical events and set between 1859 and 1901, Latham (D-39: A Robodog’s Journey) and Waters (Dictionary for a Better World) pen an ambitious verse novel told in many voices. In spite of laws forbidding further importation of enslaved peoples into the United States, Timothy Meaher, owner of a shipping business, wagers $1,000 that he can smuggle “a good number” of enslaved people across the Atlantic and into Mobile, Ala., without being caught. As a result, Capt. William Foster sails the Clotilda to the Kingdom of Dahomey in 1860, buying 110 people from the nephew of Dahomey’s king. Alternating among 14 voices, including that of the Clotilda, this novelization chronicles the journey of the 110 enslaved people across the Middle Passage and their subsequent lives, including a dream of returning home to Africa and, eventually, the establishment of free African Town, “a town far enough from Mobile that it feels/ like de center of the world, but also separate/ from de world.” Though the myriad narrative voices can sound indistinct, the authors employ a range of poetic forms, resulting in an insightful, quickly paced telling that centers tradition and resilience. Abundant back matter includes an authors’ note, glossary, timeline, list of poetry forms/styles employed, and more. Ages 12–up. Agent (for Latham and Waters): Rosemary Stimola, Stimola Literary Agency. (Jan.)
close
Details