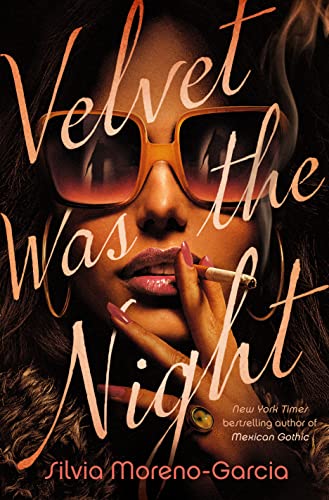 Velvet Was the Night

This seductive neo-noir thriller from bestseller Moreno-Garcia (Mexican Gothic) draws on the real-life efforts of the Mexican government to suppress political dissent in the 1970s. Maite, a 30-year-old secretary in Mexico City who feels life has passed her by, escapes from routine by reading the magazine Secret Romance, oblivious to the political upheaval around her. When her beautiful art student neighbor, Leonora, disappears, Maite, with the help of Rubén, Leonora’s former lover, begins a search that takes her into the world of student radicals. Meanwhile, 21-year-old Elvis, muscle for a clandestine, government-funded shock troop employed to suppress student protests, longs for something more and wishes to escape his old life. When Elvis’s boss assigns him to track down Leonora, his search crosses that of Maite, with whom he becomes fascinated. As the two get closer to discovering the reason behind Leonora’s disappearance, they uncover secrets that shadowy forces, both domestic and foreign, will kill to protect. This is a rich novel with an engrossing plot, distinctive characters, and a pleasing touch of romance. Readers won’t be able to put it down. Agent: Eddie Schneider, JABberwocky Literary. (Aug.)
close
Details