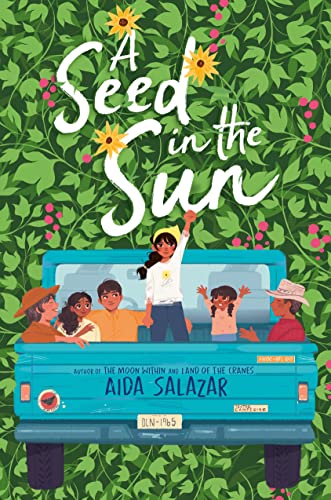 A Seed in the Sun

Centering a family of migrant workers during the 1965 Delano grape strike, Salazar (Land of the Cranes) tackles civil rights and labor justice in an extensively researched novel in verse. In Delano, Calif., 12-year-old Lula, who is Mexican American, helps her siblings to drown bedbugs as they settle into “another labor camp/ as terrible as the last.” But as Lula and her older sister Concha begin school, and their parents and older brother head into the fields with the littlest siblings in tow, the family learns that they’ve inadvertently crossed picket lines against Filipino workers striking for better wages. The situation intensifies when the siblings’ mother becomes mysteriously ill and can’t afford treatment; their father, who drinks, turns increasingly volatile; and the family faces increasingly dangerous working conditions, including the threat of pesticides and sexual assault. As Lula seeks her voice, her Filipina and Mexican American classmate Leonor speaks up for the Filipino-led Agricultural Workers Organizing Committee, of which her family is a part and which seeks to collaborate with the Mexican National Farm Workers Association, striking for better working conditions for all. Spotlighting historical figures including Cesar Chávez, Dolores Huerta, and Larry Itliong, Salazar’s lyrical poetry offers a sensitive depiction of Lula’s struggles and hopes, culminating in a personal arc that emphasizes developing one’s voice. An author’s note contextualizes historical language used. Ages 8–12. Agent: Marietta Zacker, Gallt and Zacker Literary. (Oct.)

Correction: The text of this review has been updated for clarity.