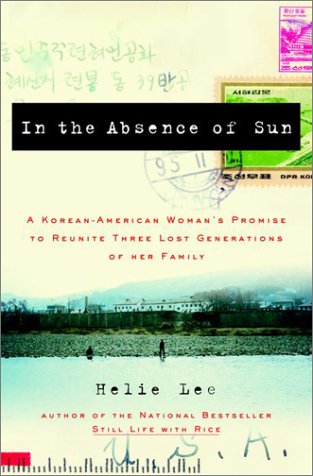 IN THE ABSENCE OF SUN: A Korean-American Woman's Promise to Reunite Three Lost Generations of Her Family

Lee's bestselling debut, (1996), created quite a stir. It chronicled Lee's grandmother's 1950 escape from northern to southern Korea during a civil war that separated the Koreas and tore Lee's grandmother's family apart, as her eldest son, Lee Yong Woon, did not make it out of the north. Lee (who was born in Seoul, South Korea, and now lives in Los Angeles) used her uncle's real name in and included his picture. Once that book became available in South Korea, Lee's family was notified that her book had placed her relatives in North Korea in danger. Nonetheless, Lee promised her grandmother that she would see her son again, thus undertaking a daring mission—chronicled here—to reunite the family. The account is a gripping and inspiring one, and Lee's prose resonates with a poetic sensibility. She also brings a distinctly American perspective to the entire situation. At times, the author's desire to make the story her own (including a long segue into her relationship with her boyfriend) steal some of the swiftness and urgency from a story that ultimately belongs to her entire family. But an all-out thrilling escape story, complete with dangerous border crossings, unexpected romance and touching family moments, makes for a terrific and beautiful chronicle. Lee reflects, "I believe one family, one person, one action can make a difference, because we are all connected. When we realize this connection, peace is possible." B&w photos not seen by .