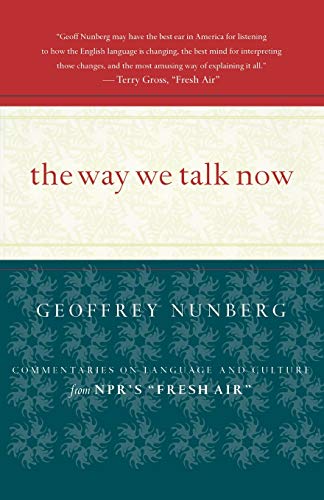 THE WAY WE TALK NOW: Commentaries on Language and Culture from NPR's "Fresh Air"

Stanford linguistics professor Nunberg is well-placed to critique netiquette, computer grammar checkers and "The Software We Deserve" via his computer language research at the Xerox Palo Alto Research Center. In these engaging, often humorous essays, he takes digs at "emoticons" ("a string of punctuation marks suggesting a facial expression laid on its side," and, moreover, a word that "deserves to die horribly in a head-on collision with "), suggesting that Kafka might have used a "frownie" and Austen a "winkie." But many of his subjects are nontechnological, concerning everyday culture and speech. While disapproving of some contemporary grammatical lapses, Nunberg admits that some words only exist for spelling bees and tolerates certain slang. Regarding the oft-aired contention in the Ebonics debate that schools must teach the language of Shakespeare and James Baldwin, Nunberg argues somewhat sardonically that, in fact, inner-city kids must learn "to speak like kids in middle-class suburbs, so they can grow up to become competent speakers of the brutalist clatter of the American political and business worlds." During the presidential election debates, Nunberg discerned from Gore's disinclination to contract verbs that he wasn't "gonna" beat the more homespun Bush. Pondering how current language trends might sound in 50 years, he worries that his daughter Sophie will meet the dowdy fate that once awaited women named Ethel or Mildred, and disdains the trendy vocabulary borrowed from California Esalen Institute–type movements (e.g., "proactive," "prequel," "rockumentary"). Nunberg never fails to reveal some bit of history embedded in language, and, despite his occasionally stuffy responses to contemporary jargon, his acuity and fixation on funny pop-phenomena keep the book fresh.