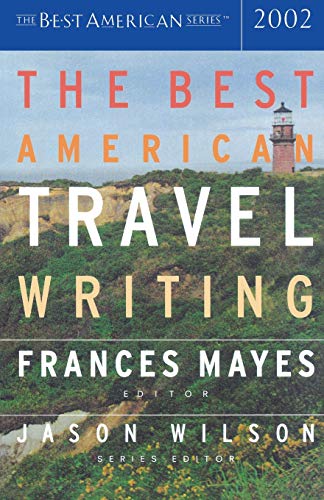 Writer Mayes () is the guest editor of this third annual collection, in which "writers cover many latitudes and longitudes, physically and metaphorically." Several pieces are topical and look at how political realities have reshaped travel destinations, as in Scott Anderson's "Below Canal Street" and Adam Gopnik's "The City and the Pillars," both about New York City on and after September 11; or Edward Hoagland's thought-provoking "Visiting Norah," about a trip to Uganda to visit a family of orphans to whom he'd been sending money. Some are lighthearted, such as David Sedaris's boisterous account of a Logan Airport layover, "The Man Upstairs" ("The cancellation was a reminder that I do not govern the activities of major airports, which seems obvious enough but always comes as a terrible shock when stated out loud"). More traditional essays include "Spain in a Minor Key" by Tony Perrottet, a leisurely look at Menorca, and Lawrence Millman's evocative and informative "In the Land of the White Rajahs," about his travels through Malaysian islands. P.J. O'Rourke, Andre Aciman, Molly O'Neill and many other authors are featured here, while destinations range from Bolivia to the Sahara. It's a captivating literary anthology that can be enjoyed on location or in the oft-mentioned armchair.