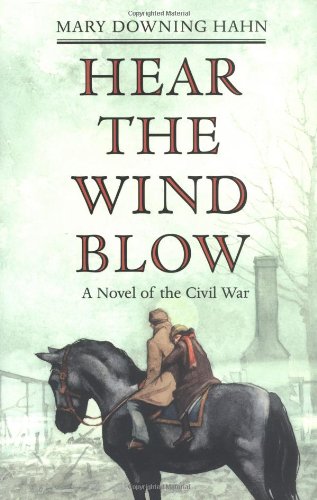 Hahn () crafts a hard-hitting Civil War novel narrated by a 13-year-old boy in Virginia. Haswell's father has died in the Confederate Army and Haswell's 16-year-old brother has recently enlisted, leaving Haswell with his religious Mama and seven-year-old sister, Rachel. As the story opens, Haswell shelters a badly wounded Confederate soldier, despite his mother's instructions to the contrary; she fears harsh Union reprisals if the soldier is discovered in their home, and her fears are brutally realized. The soldier is discovered, and the family farm razed, amid a turbulent series of events that include Haswell's mother's death. Haswell sets off with Rachel, astride a Yankee stallion, in search of their grandmother and, later, their brother. With his bravery and his honest grapplings with complex issues, Haswell will win readers' interest and sympathy from the outset: "I wanted to believe in the glory of war, but so far all I'd seen was soldiers burning farms and stealing food from folks who needed it just as badly as they did." As arrestingly as Haswell and Rachel are portrayed, however, the adults here seem flat; they, too, make difficult choices, but they do so without the children's natural ambivalence. The broad characterizations of the supporting cast detracts from Hahn's otherwise balanced approach to a war with victims—and heroes—on all sides. Ages 10-14.