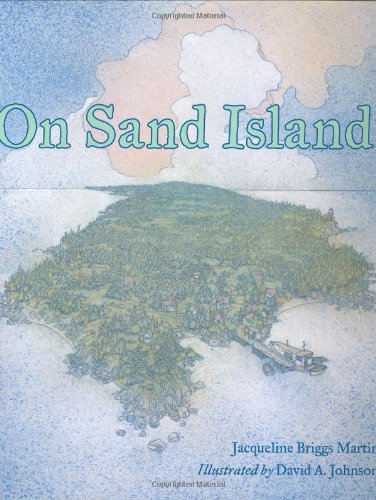 Martin's () inspiration for this lyrical tale, told in the rhythms of lapping water, came from a summer experience on Lake Superior's Sand Island, where a Norwegian named Carl Dahl once set his nets. "When Lake Superior was thick with fish/ and strung with nets/ and fishermen found their way on the water/ by watching the sun," 10-year-old Carl dreams of having a boat of his own and quietly sets out to build one. In this tightly knit community, "neighbors are closer than cousins," and Carl trades "work for work" in pursuit of his goal.

Johnson's watercolors, tinted like Japanese woodblock prints, emphasize the endless stretch of summer days. Sky and water deepen imperceptibly from horizon out to the edges as Carl pulls ashore the boards he discovers on the beach. On two successive spreads, Carl holds a board steady on a pair of sawhorses and looks on as Torvald ("a little man who whistled all day/ and built rocking chairs from fish barrels") saws; on the next, Carl toils alone on a hillside, picking Torvald's strawberries in exchange. After his day with Torvald, Carl thinks to himself, "That's the end of the hard work. Nailing will be easy." But he needs nails from Burt Hill, and in return, Carl helps Burt move the rocks from under his dock. His father caps the project with two oars from their fish shed: "These are old—from Norway," he says.

Martin effortlessly clues readers into Carl's motivation—the recent loss of his mother ("he kept the green beach glass/ he and his mother had found" in "his keep-away-bad-luck pocket") and his sister's skepticism ("You're too young to build a boat,/ .../ It will sink/ before you get past Moe's dock./ And we'll lose you, too"). When at last the boat is complete, he names it , and it's not just the boy's determination that brings the whole island to rejoice with him, it's the way he's made them all a part of his dream. Ages 5-8.