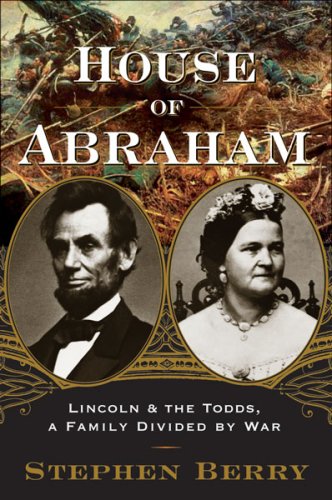 House of Abraham: Lincoln and the Todds, a Family Divided by War

Divided families make the stuff of drama. When the divided family is Abraham Lincoln's, its divisions are metaphors for the nation's own collapse. With a skilled and pleasing pen, Berry tells the tangled story of the sad and often painful element of Lincoln's life that deepened his understanding of the nation's travails. Lincoln was closer to his wife's large clan—she had 13 siblings—than to his own. Originally from Kentucky, the Todds had members in both the North and South and backed both the Union and the Confederacy. Four of them, including Lincoln, died as a result of the conflict. Some were honorable and others scoundrels, some were easygoing and others problematic. Berry, an assistant professor of history at the University of Georgia, calls many of them “miserable,” and their family a “wreck.” He manages to tell the story of each Todd with full sympathy yet critical distance, and adds another level of understanding to the president who would “bind the nation's wounds.” Finally, he rescues the Southern Todds from their obscurity. The result is a fast-paced, sobering story, never better told, of the pains of a clan and their significance for American history. 8 pages of b&w photos.