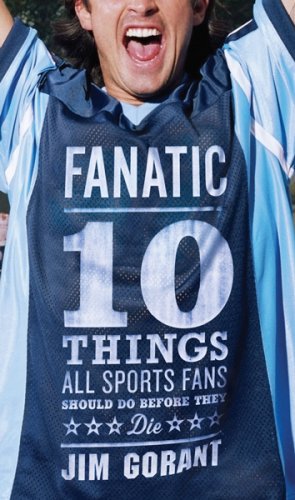 Fanatic: 10 Things All Sports Fans Should Do Before They Die

All true obsessives, whatever their object of adoration, love making lists. It's a way of trying to organize (or at least make sense of) the sprawling, life-controlling nature of their obsession. editor Gorant, being the kind of self-described "idiot" who has spent far too much of his life watching televised sports (any kind, "the more obscure, in some ways, the better") took his particular list and made it into a book. If Gorant's genial account of attending the 10 ultimate sporting events seems at times like little more than an excuse to get out of the office and make random alcohol-based friendships with assorted strangers, so much the better. As an exercise in vicarious frivolous fandom, Gorant's year-plus-long odyssey—he starts at the Eagles-Patriots Super Bowl in February 2005 and ends with Fenway Park's Opening Day on April 11, 2006—is serenely satisfying reading in the manner of a lengthy magazine article. Gorant's selection trends toward the obvious (a Packers game at Lambeau, the Masters, the Daytona 500) and the decision to include only one non-American event (Wimbledon) comes off as a little lazy. All that to the side, Gorant brings a fresh and appreciative eye to each event, whether it's the days spent lazing around an RV at the Daytona 500 with a self-described "family" of NASCAR fans or discovering how a relaxed afternoon game at Wrigley "could be all the romance a man needs."