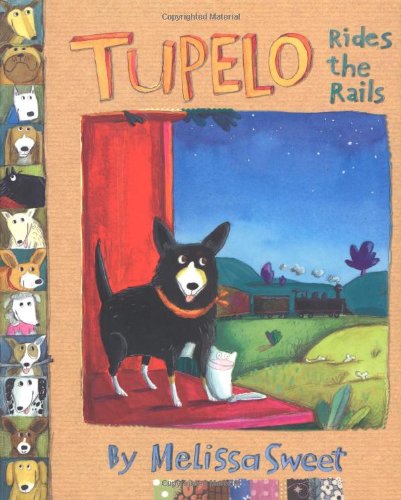 An idiosyncratic mash-up of canine lore, astronomy and the romance of the railroad, Sweet's ( ) tale wanders—much like its titular character. Callously abandoned by the side of the road, a forlorn dog named Tupelo searches for a new home. She finds kindred spirits in a pack of dogs known as the BONEHEADS (the Benevolent Order of Nature's Exalted Hounds Earnest and Doggedly Sublime), who trust a friendly hobo known as Garbage Pail Tex to escort them, via boxcar, to better lives. Though events don't initially turn out as hoped, Tupelo eventually discovers where, and with whom, she belongs. The narrative momentum goes off track with a subplot about wishing on Sirius, the Dog Star. The small, crowded scenes in cheery watercolors and mixed media showcase Sweet's unusually expressive canine cast. A bounty of design extras include several fold-out spreads, a detailed timeline in dog years of dog heroes (from Balto to Lassie, from Old Yeller to Superman's dog, Krypto) and elegant endpapers featuring various constellations in the night sky. Ages 6–10.