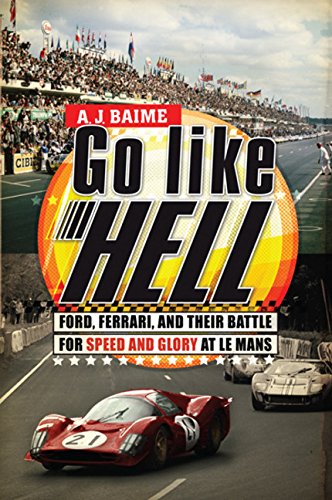 Go Like Hell: Ford, Ferrari, and Their Battle for Speed and Glory at Le Mans

In the 1950s and ’60s, the 24 hours of Le Mans in France were not just a race but, according to editor Baime, “the most magnificent marketing tool the sports car industry had ever known.” It was also incredibly dangerous, the site of the biggest tragedy in racing history—Pierre Levegh’s Mercedes-Benz 300 SLR slamming into an embankment and leaving at least 75 dead in 1955. Baime’s narrative culminates in the 1966 Le Mans race—where Ford cars placed first, second and third—and the fierce competition between Ford and Ferrari. Ford head Henry Ford II realized that in order to compete in the world market, his cars had to win races—and he could accomplish both by winning at Le Mans. Blocking him was the “agitator of men,” Enzo Ferrari, who devoted his life to building the perfect champion automobile and who prevented Ford from buying Ferrari in 1963. Both men’s quest for victory trickles down to their workers. Henry II spent millions on technology and manpower to build the perfect car, the GT40, while displaying limited patience after years of failure. Meanwhile in Italy, Ferrari’s world-class drivers faced their own difficulties pleasing their calculating, results-driven boss. Baime’s skillful reporting and introspective writing style make for an insightful portrait of two automobile legends, as well as an exciting account of a bygone era in racing and in American culture. 8-page color insert.