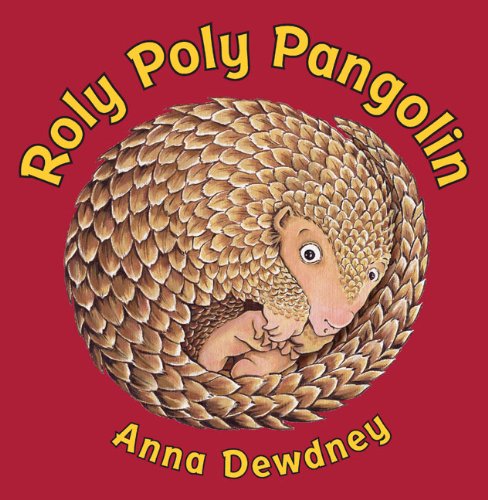 As in her Llama Llama books, Dewdney again taps into common toddler insecurities. This story stars Roly Poly, a young pangolin (a scaly, endangered mammal) who is very timid when it comes to the outside world (“Roly Poly, very small,/ doesn't like new things at all”). After running away from a furry animal who wants to play, he is frightened by a “teeny tiny” voice calling to him, and accidentally discovers pangolins' trademark defense mechanism. He trips and rolls himself into a ball for protection as he careens down a hill (“The world's outside/ but he's within—/ Roly Poly Pangolin”). Peeking out, however, he spies another small pangolin, and suddenly he's “not so frightened, after all,” as he frolics with his new friend and the friendly monkeylike creature who appeared earlier. Dewdney's artwork, rendered on rough-textured canvas, feels less polished than her earlier books, but it readily transmits her protagonist's emotions. The story retains Dewdney's familiar rhyming couplets, and while this hero—perhaps by nature of his timidity—lacks some of Llama Llama's zip, his nervousness will be widely recognizable to readers. Ages 2–up.