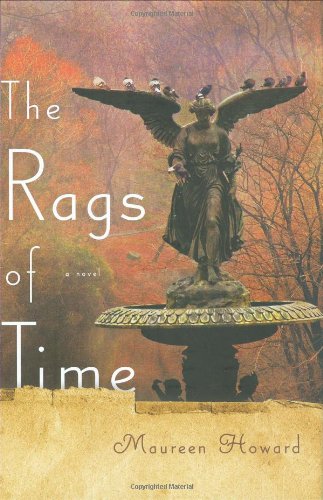 The Rags of Time

Central Park features prominently in this rambling final installment of Howard’s “Novels of the Seasons” quartet. Plagued by heart trouble, an aging novelist is confined to her New York apartment, with slow walks through the park as her only relief. “Soul-baring” confessions, many of them rants, are directed against Bush and the wars in Afghanistan and Iraq as the narrator weaves commentary on contemporary events with meditations on her past as a writer and political activist. These thoughts, blended with detailed descriptions of her walks, become entries in her daybook. Characters from previous novels in the series reappear: Artie, the math Ph.D. candidate and his painter wife; Sylvie, an elderly refugee from Nazi-occupied Austria; Marie Claude, a recently widowed American history professor. But the narrator’s main focus, in the most engaging passages, is three prominent figures: Christopher Columbus, Sir Walter Raleigh and Frederick Law Olmsted. Quotations and photographs flesh out learned reflections, but Howard’s digressions are too lacking in direction to hold our attention through the endless high-brow references. The marks of a master—beautiful prose and ambitious structure—are not enough to hold together the rich strands of this patchwork novel.