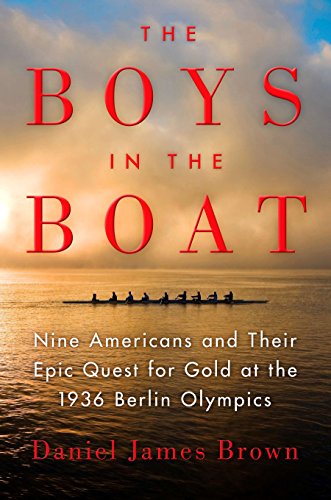 The Boys in the Boat: Nine Americans and their Epic Quest for Gold at the 1936 Berlin Olympics

Doughty rowers heave against hard times and Nazis in this rousing sports adventure. Brown (Under a Flaming Sky) follows the exploits of the University of Washington’s eight-man crew, whose national dynasty culminated in a gold medal at the 1936 Berlin Olympics. Brown tells it as an all-American story of humble working-class boys squaring off against a series of increasingly odious class and political foes: their West Coast rivals at Berkeley; the East Coast snobs at the Poughkeepsie championship regatta; and ultimately the German team, backed by Goebbels and his sinisterly choreographed Olympic propaganda. The narrative’s affecting center is Joe Rantz, a young every-oarsman who wrestles with the psychic wounds inflicted on him by poverty and abandonment during the Great Depression. For this nautical version of Chariots of Fire, Brown crafts an evocative, cinematic prose (“their white [oar] blades flashed above the water like the wings of sea birds flying in formation”) studded with engrossing explanations of rowing technique and strategy, exciting come-from-behind race scenes, and the requisite hymns to “mystic bands of trust and affection” forged on the water. Brown lays on the aura of embattled national aspiration good and thick, but he makes his heroes’ struggle as fascinating as the best Olympic sagas. Photos. Agent: Dorian Karchman, WME. (June 4)
close
Details