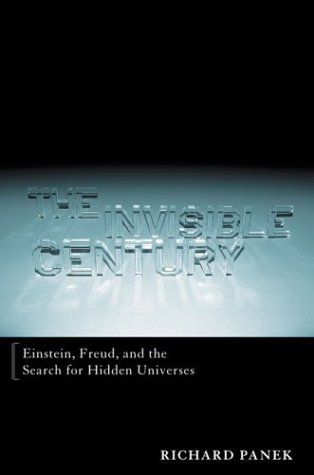 THE INVISIBLE CENTURY: Einstein, Freud, and the Search for the Hidden Universes

Veteran science writer Panek's pairing of the dual icons Einstein and Freud, whose labors were in widely disparate fields, is both natural and inspired. He uses his formidable writing skills to illuminate two of the 20th century's most notable accomplishments, the theory of general relativity and the discovery of the unconscious, weaving them into an informative and interesting history of the scientific method. Panek's explanation of Einstein's theory of relativity is excellent, and readers will with pleasure understand this counterintuitive concept. He is equally good at describing how Freud developed his theory of the unconscious. Panek also describes how the two rejected the 19th-century scientific paradigm, which held that the more accurate measurement of physical aspects of the universe would unravel its secrets. As Panek ( ) states, "...Einstein and Freud wound up venturing where their contemporaries did not because at a certain point, they investigate. They thought. They reconceived the problem." Besides providing valuable biographical detail about both Freud and Einstein, Panek demonstrates a wide-ranging knowledge of the development of scientific thought and philosophy, as well as the major developments in both cosmology and the study of human anatomy. There is a remarkable amount of information in this short book, and Panek's valuable thesis—that the triumph of 20th-century science was the discovery of the invisible workings of the universe and ourselves—is well made.