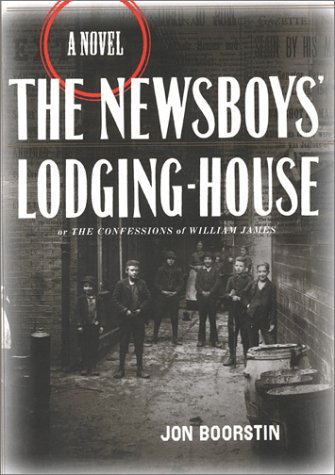 First-time novelist Boorstin offers a speculative tale about a pivotal period in 19th-century philosopher William James's life for which no journal entries exist. In 1872, when the future philosopher is 30, a preoccupation with the nature of evil and "a horrible fear of my own existence" make him severely depressed, and his father has him committed to a Massachusetts mental hospital. While convalescing, James becomes interested in Horatio Alger's rags-to-riches tales, particularly in his deceptively simple vision of evil. Bored by the hospital, James talks his way out of the wards and flees to New York City. He teaches art to pay his rent at a rooming house primarily inhabited by street urchin paperboys; there, he meets precocious young newsboy Jemmie, a living embodiment of an Alger hero. A conniving older housemate tries to seduce Jemmie into a life of crime, and James, with the help of Alger himself, who also teaches classes at the rooming house, tries to intervene and mold Jemmie according to the moral and religious questions that have been on his mind. The book's wordy style, reminiscent of , does not detract from the fast-moving story or the panoramic view of 1870s New York street life. As a portrait of James, the novel is not altogether plausible, and the philosopher tends to be overshadowed by Boorstin's passionate portrayal of the city itself. But Boorstin's diverting, well-balanced mix of the cerebral and the visceral will please historical fiction readers, especially those whose interest in Big Apple history was spurred by .