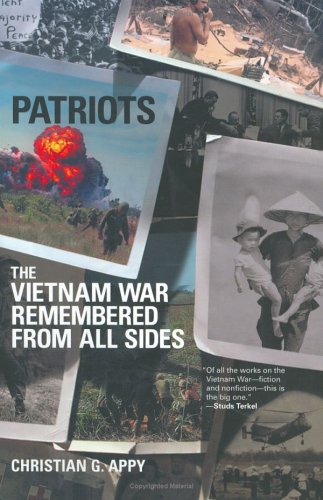 PATRIOTS: The Vietnam War Remembered from All Sides

When Appy () says "all sides" he is not exaggerating. It's difficult to think of any group of people who were involved in the many and varied aspects of the American war in Vietnam not represented in these oral history pages. Appy's testifiers include war hawks; peace activists; former Vietcong guerrilla fighters, Vietnamese Communists, Vietnamese anti-Communists; American veterans of many stripes, from privates to generals, medics to infantrymen; POW/MIA activists; poets, novelists, journalists; entertainers; and former government officials from all sides. Appy amply fulfills his goal of presenting a "vast range of war-related memories" in this massive, valuable book. He spent five years traveling around the country and in Vietnam, interviewing 350 people, and included about half of their stories. Oral histories often suffer from loose organization or from voices that pop up confusingly again and again. Appy takes a different approach. Each person appears only once, and Appy gives the participants plenty of room to tell their stories. He also provides on-the-mark, often insightful introductions to each entry, along with brief but to-the-point chapter introductions to set the historical context. The book contains the remembrances of some well-known people, including Gen. William Westmoreland, Gen. Alexander Haig, Gen. Vo Nguyen Giap, Walt Whitman Rostow, Julian Bond, Ward Just, Oliver Stone, poet Yusef Kumunyakaa and writer-activists Todd Gitlin and Jonathan Schell. There are others known mostly to Vietnam cognoscenti (Chester Cooper, Le Minh Kue, Rufus Phillips, Wayne Karlin and Nguyen Qui Duc), as well as many of the voices of just plain folks who experienced the war in myriad ways. It all adds up to a solid contribution to the primary source background of the longest and most controversial overseas war in American history.