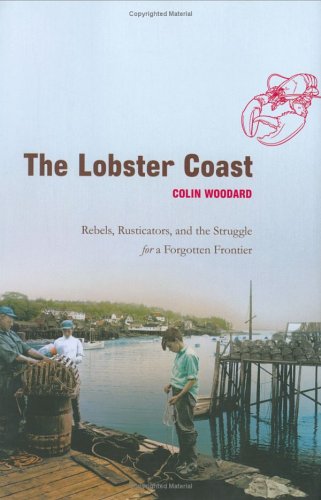 THE LOBSTER COAST: Rebels, Rusticators, and the Struggle for a Forgotten Frontier

In this lucid cultural history of Maine, journalist Woodard tells the story of the rugged people who inhabit the state's coastal fishing communities, beginning with the Scotch-Irish, Germans and migrants from southern New England who from the early 17th to the early 19th centuries struggled to make a living in an inhospitable environment while trying to fend off Indians, religious zealots, wealthy Bostonian land grabbers and "rusticators" (vacationers who spawned unwanted development). Maine's economy prospered for a while after it seceded from Massachusetts and became a state in 1820, but between 1860 and 1900 everything collapsed except for lobstering, which the fishermen managed to protect with effective conservation practices. Lobsters became, and remain, the basis of the state's fishing industry. The author was born and raised in Maine, and well understands the pride, independence and ability to work together for the good of the community—(traditions derived from the early settlers, he says), which helped the fishermen preserve a resource that is essential to their livelihood. But, he points out, other factors are now at play, for the state is being overrun by suburbanites who don't understand or respect this tradition. Woodard tries to maintain hope that the old spirit of independence will save the state's distinctive character, but he can't help ending on a discouraging note, wondering whether Maine will soon be just one more suburb in the great East Coast megalopolis. Woodard ( ) covers a lot of ground in his informative book, and he never fails to make the story engaging. Maps not seen by .