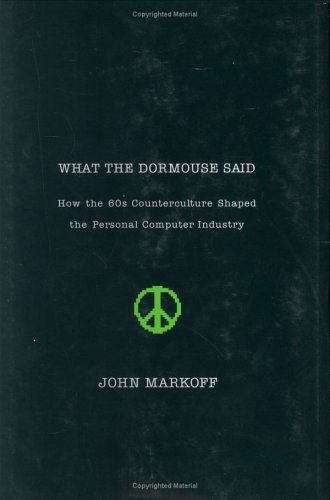 WHAT THE DORMOUSE SAID...: How the 60s Counterculture Shaped the Personal Computer Industry

Since much of the research behind the development of the personal computer was conducted in 1960s California, it might seem obvious that the scientists were influenced by the cultural upheavals going on outside the lab. Very few people outside the computing scene, however, have connected the dots before Markoff's lively account. He shows how almost every feature of today's home computers, from the graphical interface to the mouse control, can be traced to two Stanford research facilities that were completely immersed in the counterculture. Crackling profiles of figures like Fred Moore (a pioneering pacifist and antiwar activist who tried to build political bridges through his work in digital connectivity) and Doug Engelbart (a research director who was driven by the drug-fueled vision that digital computers could augment human memory and performance) telescope the era and the ways its earnest idealism fueled a passion for a computing society. The combustive combination of radical politics and technological ambition is laid out so convincingly, in fact, that it's mildly disappointing when, in the closing pages, Markoff attaches momentous significance to a confrontation between the freewheeling Californian computer culture and a young Bill Gates only to bring the story to an abrupt halt. Hopefully, he's already started work on the sequel.