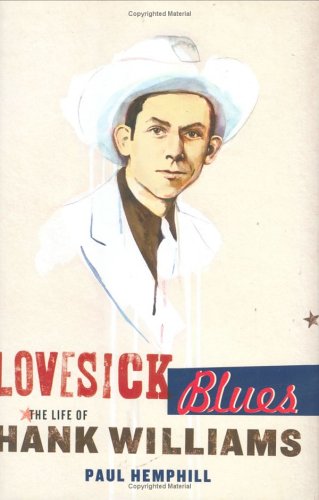 This concise, startling biography starts not with its subject, Hank Williams, but with its author sitting in the cab of his father's truck one day in 1949, hearing Williams sing "like a hurt animal." The brief incident immediately binds Hemphill and Williams (1923–1952) together as children of the rural South, united by the places and circumstances from which they came (Hemphill has written four novels and 11 nonfiction works dealing with the blue-collar South). Hemphill shifts from his own childhood to Williams's vagabond youth with scintillating descriptions of Depression-era Alabama. Against this backdrop, Hemphill tells the story of Williams's boyhood, which involved constant movement from town to town, infrequent school attendance and jobs as a shoe-shine boy and street performer. Williams's subsequent rise, from "Singing Kid" novelty to headliner at the Grand Ole Opry, could seem like a cliché, but Hemphill's descriptions of the "places where a chicken-wire fence separated the band from the crowd" lend a gritty reality. This frankness extends to the depiction of Williams's chronic alcoholism, violent marital troubles and lonely, sudden death at age 29. With the end of Williams's life, the book turns back to its author, as an older, wiser Hemphill recounts some of the sorrows of his own life. The connection between author and subject is what makes this book so rewarding.