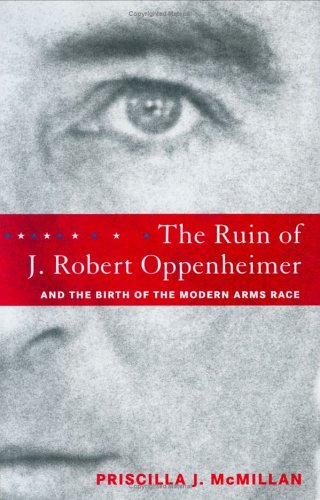 The Ruin of J. Robert Oppenheimer and the Birth of the Modern Arms Race

Harvard historian McMillan ( ) focuses on the nine-year span in the late 1940s and early '50s when Oppenheimer, who had spearheaded the development of the atom bomb, was transformed from a hero into an alleged security risk, accused of spying for the Soviets. In light of the outstanding new biography and other recent scholarship on Oppenheimer, this account doesn't transform our perception of the man or the case, but it does fill in background on the anti-Communist agitators inside and outside the federal government, such as Atomic Energy Commission member Lewis Strauss, who conspired to "destroy Oppenheimer and make [Edward] Teller the leader of the scientific community" because of the latter's enthusiasm for (and Oppenheimer's doubts about) developing the hydrogen bomb. McMillan makes Teller one of the chief villains, dwelling on his contentious relations with other atomic researchers and underlining her contempt for his role in creating a massive, "superfluous" nuclear arsenal. The idealistic claim that Oppenheimer could have slowed or prevented the arms race through sheer force of personality is less convincing. Still, this is a damning record of the "travesty of justice" perpetrated through the smear campaign against Oppenheimer.