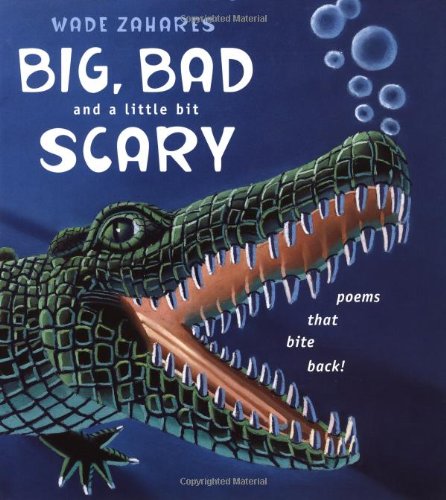 BIG, BAD AND A LITTLE BIT SCARY: Poems That Bite Back!

Zahares's () boldly illustrated compilation of animal poems is a trip to the zoo and the haunted house wrapped into one. His full-bleed illustrations of the arctic tundra, ocean depths, jungle and swamp provide the backdrop for this forbidding collection of verse. Large, menacing eyes and open mouths of piranha seem to protrude into readers' space for Dick King-Smith's "Strippers": "They'll strip off your flesh like you'd skin a banana./ There's no time for screaming, there's no time for groans./ In forty-five seconds you're nothing but bones." The looming, ominous shadow of another predator hovers above a mouse for Russell Hoban's "Sparrow Hawk": "Below, the field mouse, where the shadow glides,/ Holds fast the small purse of his life, and hides." A frog tries to escape a similar fate in Eve Merriam's "Viper." Zahares pictures pointy reptilian scales and forked tongue tantalizingly close to the amphibian. Respite from the frightening passages comes from other poets, including Karla Kuskin ("A porcupine looks somewhat silly./ He also is extremely quilly./ .../ I would not want a porcupine/ To be my loving valentine") and Ogden Nash ("If called by a panther,/ Don't anther"). Zahares's captivating illustrations, in a unifying palette of cool blue and green hues, will bring readers as close as they may care to come to creatures that make everyone's pulse race a little faster. Ages 5-up.