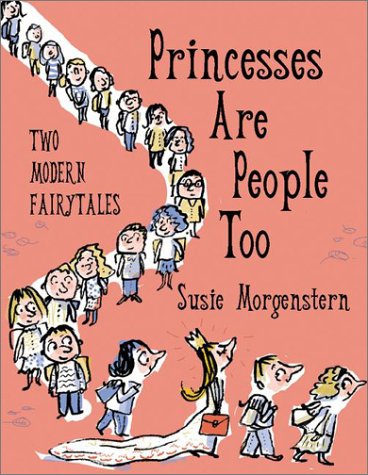 Morgenstern () offers two slim stories that mildly tweak fairy-tale notions of princesses and princesshood. The first and more successful entry, "Even Princesses Have to Go to School" introduces Princess Yona, only daughter of a king and queen who have fallen on hard times (and who seem to have nothing to say except "Don't forget—you're a princess!") Perpetually bored, Yona is delighted when her parents sell their dilapidated 57-room castle and move to a three-room apartment; their new palace, she notes happily, has hot and cold running water and a flush toilet, while "the best part was their noisy neighbors.... Yona could practically follow an entire television show one of her neighbors was watching." The setup is wittier than the plot, which has to do with Yona's desire to attend school, and the message here—that "all little girls are princesses in their father's eyes,"—is straight out of . The second story, "Someday My Prince Will Scratch," follows Princess Emma's search for a prince who will satisfactorily scratch the annoying itch in her back. Its humor hinges on insults based on the suitors' names ("Go jump in the lake, Drake!"; "You're a rat, Pat"), and while this approach may appeal to some readers, others may tire of it quickly. Final art not seen by . Ages 8-12.